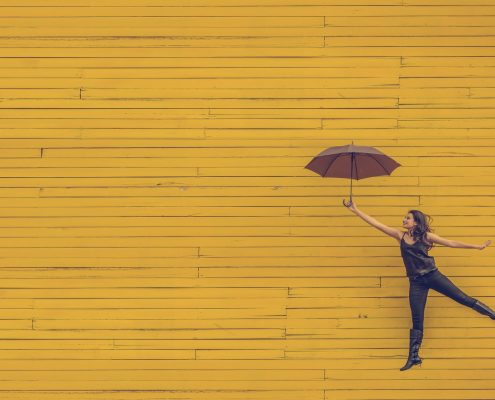 This past Monday, I had the pleasure of talking with Tyler Crispen on my show, Transformational Clutter Clearing, on Hay House Radio. Tyler competed in the most recent season of the reality competition show, Big Brother, where he came in second and was named America’s Favorite Player.

I wanted to share his story with you as an example of how crooked our joy journey can be. And how, if we just keep showing up in all different ways, life will unfold before us.

Tyler had dreamed about competing on his favorite show for years, and as soon as he was old enough to try out, he did. In fact, he submitted a casting video on his 21st birthday – the minimum age you have to be to apply.

And he got the call! He was in! Or so he thought.

He went through the casting process and made it so far, he thought it was a done deal.

Then, at the last minute, he was cut.

He was devastated. After being hurt and mad for a bit, he made a conscious effort to let the sting of it all go. And he applied again and again. And then he did the most important thing he could do, and often the hardest.

He surrendered to the outcome.

He decided to go on a different adventure and moved to Australia for six months, found some lifeguarding jobs, and traveled around. While down there, he was invited to audition for a new show called TKO: Total Knock Out — an obstacle course competition hosted by comedian Kevin Hart. He figured “why not?” and did it, and made it on.

TKO airs on the same network as Big Brother and when the BB execs saw him on TKO, they got in touch and asked him if he had ever heard of their show.

And he was cast on the next season.

I want you to pay attention to something here:

The one year he doesn’t apply to be on Big Brother is the year they get in touch with him and invite him to be on.

The one year he takes his hands off the wheel and puts the only goal he had written in his journal – “Get on Big Brother” –  in the periphery instead of hyper-focusing on it is the precise time when he creates space to let the universe work its magic.

The story gets crazier. Not only does he come to be the most beloved player of the season (and get a $25,000 check as a result), but he ends up meeting the love of his life while locked in the house.

Angela, who tried out for Big Brother several times, was also *this close* to being cast on a past season and also ended up being cut at the last minute. Just like Tyler.

They end up on the same season and their relationship developed slowly over the weeks. Oh, and despite both of them living in Hilton Head, SC, their paths never crossed before this.

Tyler now sees why it all played out the way it did.

“You never know what is waiting for you once you just go for it,” he said. “This whole windy, crazy journey led me to Angela.”

And this, my friend, is blazing a trail. It’s going after something even if it seems impossible, unlikely, or scary.

It takes a risk.

Tyler didn’t ever think about meeting his dream girl by applying for a reality competition. That was never in his sights. He just kept saying “yes” to ideas, thoughts, and impulses, and that’s where it led him.

Because remember, the universe is always conspiring in your favor and dreaming bigger for you than you would ever allow yourself to dream. But you gotta let it know you’re in on the dance.

When you do something — take any action — to go after a dream, the universe rallies in support and the dance begins.

It steps. As long as you keep moving, so will the universe.

This is how you get in the flow.

This is how your dream becomes reality.

One step at a time.

Now it’s your turn. What leap of faith will you take next? It needn’t be as massive as moving to Australia or going on TV.

So what do you think? Are you up for it?

I know you have it in you! Go get it!

Are You Sabotaging Your Dreams Before You Get Started?

If Your Goal Is Important Enough, No Hurdle Is Too Big
Scroll to top