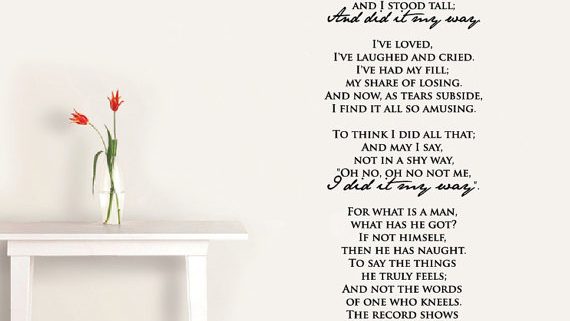 My Dad would’ve turned 83 years old last Sunday. Though he’s been gone for more than a year, it’s still hard to believe sometimes. I often expect him to be at home when I head up to visit my mother.

Dad loved to hear stories of my dreams and plans of our tiny house — traveling with my little abode in tow, seeing all the sights across this beautiful country. He’d share stories of his domestic travel and recall his favorite destinations and sites, and I was always sure to make note of them.

As Melissa and I worked on the tiny house last weekend, my mind drifted to my father quite a bit, with it being his birthday. I did my best to lose myself in the projects, and did pretty well for the most part. Until my eyes unexpectedly started to leak from time to time.

I wondered what he was thinking as he was looking down on the progress; at the siding being installed; at it looking more like a house on the outside and less like a construction site. I wish I could see the sparkle in his eyes as I’d explain to him where everything will go on the inside.

A lot of people don’t get the whole tiny house living idea. My Dad sure didn’t, but he still unconditionally supported me, which says a lot about the man he was — a rare combination of a critical-thinker and a compassionate soul.

When we tell people about our plans, we often hear things like:

I get that this lifestyle isn’t for everyone. In fact, it’s not for most. But that’s not for me to worry about. Just like it’s not your job to convince others of the validity of your dreams.

Opinions, solicited or not, are their own form of clutter. If you’re already on shaky ground as you plant your feet on your journey, the last thing you need are naysayers trying to keep you small by puking their own limitations on you.

As soon as I find myself trying to convince someone that I’m not nuts, I take it as a sign to wrap up the conversation with a simple, “Well, it’s not for everyone.”

My Dad’s theme song his whole life was “My Way,” by Frank Sinatra. Even as I type that, I can picture him singing it. He loved Ol’ Blue Eyes, and he loved the message in that song. 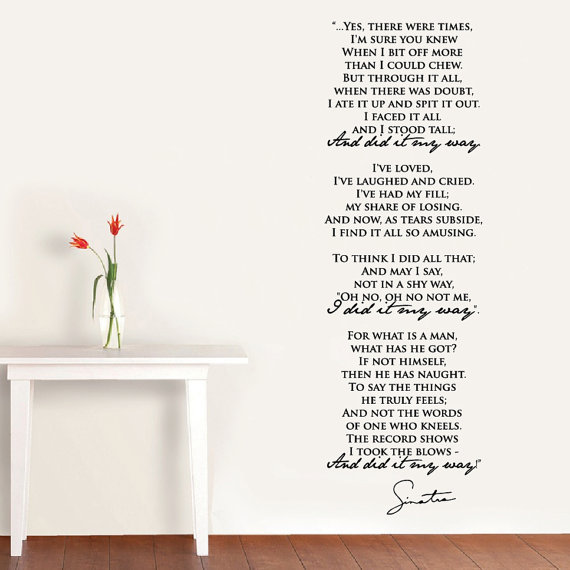 Since my Dad’s passing, I have adopted the song as my own. As I stand at my tiny house, sometimes wondering if I’m totally nuts for building this thing, I remember those lyrics:

“Yes, there were times, I’m sure you knew, When I bit off more than I could chew. But through it all, When there was doubt, I ate it up and spit it out. I faced it all, and I stood tall, And did it My Way.”

Sometimes when I listen to the song, I cry as I remember and miss my Dad. Other times I blast it in my car as my empowering, “Hell Yeah!” anthem to remind me that I’m in charge of my life.

The more confident I am in my commitment to my unique template for life, the more likely I am to stick it out when the road gets rocky along the way. Because believe me, there have been many times I’ve considered throwing in the towel on the tiny house build, the most rattling of which was when we had to tear it down and start all over due to dangerously substandard work from our previous contractor. It would have been really easy — expensive, but easy — to say “forget it,” and go back to toeing the line.

As we faced setback after setback, several people suggested we consider them a sign from the universe to wrap it up; to go in a different direction. But when the going gets tough, it’s not time to throw the baby out with the bath water. I think it’s more important to consider the lesson within the specific setback instead of making it about the entire vision. Take the opportunity to learn so you don’t find yourself up against the same challenge throughout your life but in different forms.

With our contractor situation, I can see now that I should’ve been more wary of his willingness to cut his quoted price down by two-thirds and his promise of an unrealistically fast timeline. I also could’ve spoken up sooner when I caught things that were wrong instead of assuming he and his crew were the experts. I could’ve worried less about be the amenable, easygoing client and instead asked directly for what I wanted.

Like others’ opinions, your doubts and fears are just clutter, and the way to tend to that clutter is to give it space to be heard so you can determine how to address it. Ignore it and it’ll get real LOUD. Hear it and you can address any legitimate concerns and reassure yourself around the unfounded noise.

You deserve to live the life of your dreams. And you, my friend, are a trailblazer, otherwise you wouldn’t be reading this. So I challenge you to live with rabid intention and pursue your adventure with fury.

Holiday Series Part 5: Mix All the Ingredients for the Best Holiday Yet

Protected: Clarifying Your Vision for the New Year replay page
Scroll to top