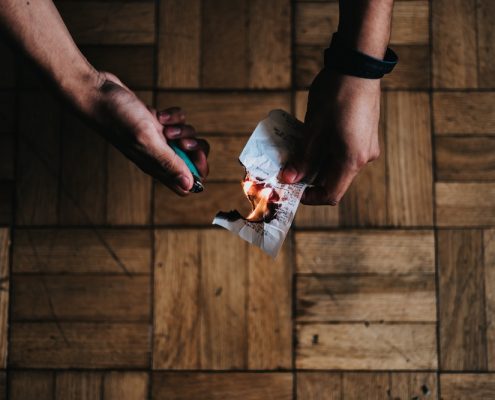 Melissa and I were packing a bag to go away for the night last weekend. In it, I saw a half-done bracelet that she starting making about 10 years ago. Literally.

I remember because she started it during a weekend when we had a big sleepover at our house with some nieces and nephews and they were teaching us how to make these thread bracelets.

“You think maybe it’s time to get rid of this bracelet?” I asked her.

“I know, I really should just finish it,” she said.

“I don’t know,” she answered, kind of annoyed at my pressing. “I’ve been carrying it around long enough, it’d be silly to just toss it.”

“Maybe it’s sillier to carry it around for 10 years.”

I often hear from people about incomplete projects such as blank canvases they’re saving for the elusive day when they start creating art again, or the piles of fabric they’re storing for the project that might happen in the future, or notes for a book they’ve been “writing” for years. They often talk about how crappy they feel having abandoned them.

When thinking of undone projects, it’s a good idea, like with any other kind of clutter, to consider how these things that you say bother you might actually benefit you. I know that sounds crazy, but if there wasn’t a payout to keeping them around, you’d either work on them or get rid of them.

Could keeping those canvases help you feel like an artist without having to share your talents with the world?

Maybe those book notes feed your ability to say “I’m writing a book,” without having to finish it and shop it around?

Incomplete projects can easily lull you into complacency while draining your energy and making you feel bad about yourself at the same time so think about how not working on them may be serving you.

Another consideration is to think about the role these half-done projects play in your life. Are they a representation of an old version of yourself? Maybe they’re validating some limiting beliefs you hold? Are they telling you who you think you “should” be?

Dave Bruno tells a story in his book, The 100 Thing Challenge: How I Got Rid of Almost Everything, Remade My Life, and Regained My Soul, about the vast array of woodworking tools he acquired because he imagined himself as a “master woodworker.”

As he challenged himself to pare down to just 100 items, he struggled to get rid of these tools because he never made anything significant with them, and had invested quite a bit of money acquiring them.

Because he was up against this self-imposed challenge of owning only 100 items, he knew he had to make a choice. When he did, he was surprised at the result.

After deciding to get rid of the tools, his first feeling was, unexpectedly, relief and his first thought was, “Oh, good, I don’t have to be a woodworker anymore.”

He hadn’t realized how much those tools were telling him who he “should” be instead of who he truly was. So along with the tools, he let go of that false image of himself. And in doing so, he opened space in his life to focus on who he truly wanted to be—a minimalist sharing his vision with the world.

Just because you’ve been carrying something around for a long time doesn’t mean you have to hang on to it. Whether it’s a bracelet, an old story you’re telling yourself, a relationship that is more draining than fulfilling, or an outdated goal, the length of time it (or he) has been in your life doesn’t mean it (or she) has earned the right to remain.

If it’s not aligned with the vision you have for your life today, then the only thing it’s doing is getting in the way and preventing you from making any progress on your dreams.

A final point to ponder is if you do, in fact, have a strong passion to work on these projects but can’t seem to find the time, why might that be? Where are you spending time that could be devoted to your project? What are you currently doing that you’d rather not be? And what payout are you getting by spending your time in all the wrong places? The real clutter to look at here is your commitments and your motivation behind your choices.

Are you trying to ingratiate yourself to others?

Do you want to be known as the hero?

Do you define your worth by how much people need you?

Do you feel you need to earn love?

When you start peeling back the layers, you’ll find that what you think is standing in your way is rarely the real issue.

This week, think about the undone projects in your life and spend one Pom round (one 25-minute Pomodoro round) journaling about what’s really behind your lack of movement on them.

Then come share! I’d love to hear what you discover. Join the conversation on my blog here.

Oh, and Melissa still has that bracelet. I think I’ll make her read this and do the exercise!