A few months ago, I went out on my back deck to do some writing, and to my surprise, someone was there waiting for me. “Hey there,” I say. “I wasn’t expecting to see you here.” He says nothing; only comes over to me and rubs against my leg, eager for attention.

Now, before your mind goes elsewhere, allow me to introduce him to you: 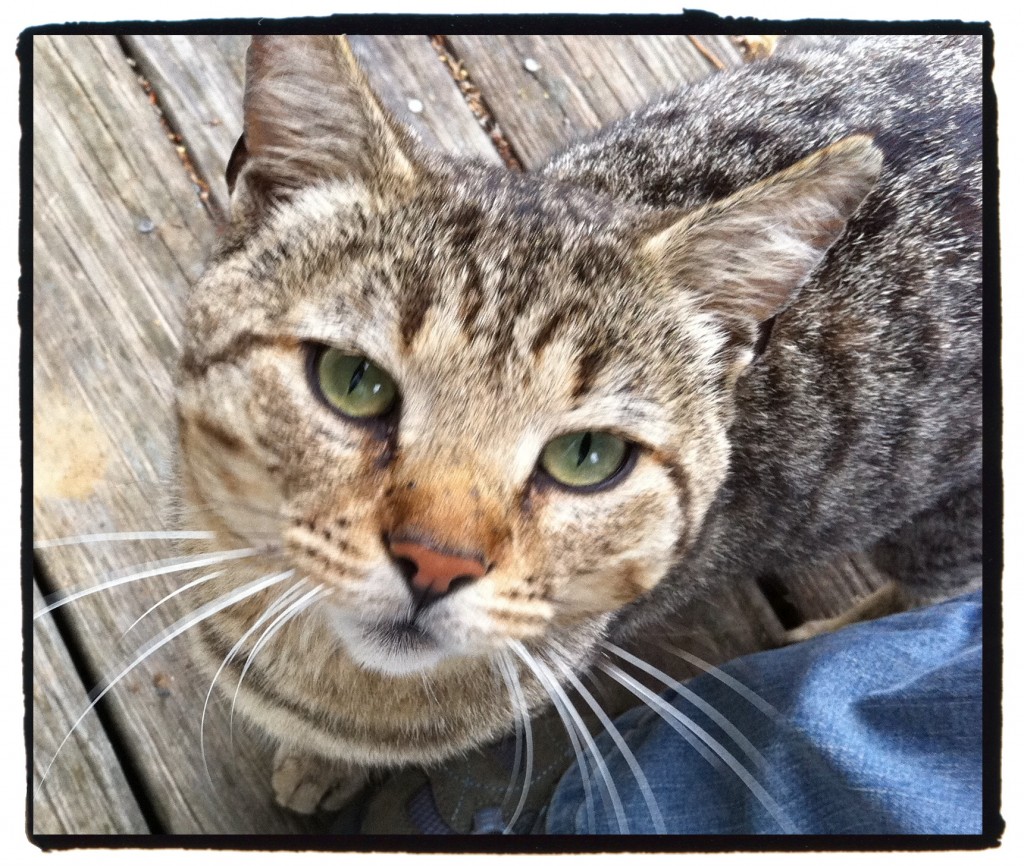 This sweet guy is just chillin’ on my patio chair like he lives here. I bend down to pet him and he lets out a strong, loud MEOW, all the while giving off the most loving energy and body language.

I look for a collar or any identifying information, but find nothing. Well, nothing except some large “evidence” that he hasn’t been neutered. “Are you hungry, little fella?” Again, a very vocal MEOW. So, because I am my mother’s daughter (you’ve never met a bigger animal lover than my Mom), I head inside to get him some food.

By now, my two cats, Kiva and Kaya, are pinned to the sliding glass door looking at him, like, “Hey, what’s this one all about?” Of course, I feed my babies first before heading out to feed Rex. (Oh, yeah, I’ve already named him at this point.) He’s more than thrilled to have some chow.

This routine goes on daily for a few months. It would break my heart to think of him out there during rainstorms, but I couldn’t let him in my house. My cats would go ballistic! Fortunately, we have a fantastic organization in my area, the Merrimack River Feline Rescue Society. They’d know what to do! Before I went there, however, I created a flyer with several pictures of Rex, titled “Does This Cutie Belong to You (or Would You LIke Him To?)” 🙂 I’d hate to think of a family missing their cat and I send him off to a shelter. I spend some time driving around the neighborhoods nearby, dropping a flyer in each mailbox.

A week or so goes by before I get an email from a woman. Although she isn’t his owner, she recognizes him because she has been feeding him, too! Good to know I’m not his sole source of nourishment, but I must say, I felt a bit betrayed. Rex was totally cheating on me!

I decide I’ll wait a little longer for someone to respond before I call the shelter. Good thing I did…

No, not because his human came forward, but because one day I went outside to feed Rex, and found this on the deck: 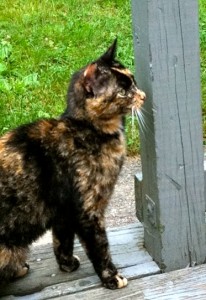 Yup, that’s Sketch (named her, too. So what?) She’s very timid and scared when we first meet, hence the name. We’re officially becoming the crazy cat house — two inside, two outside. I head back inside to get a second can of food, and when I come out, Rex goes to town. Sketch, on the other hand, is scared, hesitant to trust me. I put her dish down, far away from me and Rex. About a second after I walk away, she is scoffing it down like nobody’s business. Literally not taking a breath and instead snorting out of her nose. This poor girl is famished and not sure when her next meal will come.

After a couple of weeks of feeding both cats, it was time to do something. As much as I knew I would miss them, I call the shelter. Liz tells me that they’ll be doing spaying and neutering at their CatMobile in a few days, and that she can send some volunteers over to help me rally Rex and Sketch so they can be on the schedule for surgery, flea treatments, microchipping, disease testing, and vaccines. Yes, they do all of that for these homeless cats (as well as pets with homes, at an incredibly discounted rate). She mentions that the shelter is at maximum capacity right now (it’s been a “fruitful” kitten season!) and asks if it would be ok if Rex and Sketch came back to my neighborhood after they’ve recovered and until the shelter thins out a bit. At first I’m hesitant, not wanting them to be outside in any bad weather, but then, excited. I’d miss them if they were gone for good!

Tuesday afternoon comes, and two wonderful volunteers — Patty and Sharon — arrive to help get them into carriers. Sketch is a piece of cake as she has made the carrier I put out on the deck as shelter from the rain her permanent home. Rex, however, is nowhere to be seen. We all wait around for a bit, knowing it’s dinner time, but he’s a no show. “That’s ok,” Patty says. “We can take care of him next week.”

I say my goodbyes to Sketch, relieved to know I’ll see her again in just a couple days. As soon as they pull away, guess who prances up onto my deck with a loud MEOW to announce his arrival? Yup, Rex.

I quickly call Patty and ask if she can come back to get Rex, and with a little coaxing with food in the carrier, in Rex goes. “See ya later, buddy. By tomorrow afternoon, you’ll be walking easier without any ‘obstacles’ getting in  your way anymore!” And away they go.

I call the shelter the next day to see how the surgeries went. Both came out with flying colors, tested negative for any diseases, and are now up-to-date with all their shots. Liz estimates Sketch to be about 1 or 2 years old, and Rex to be 2 or 3 years old. Based on the cats’ behavior and the vet’s examination, it’s clear that both were somebody’s pet at one time. I assume the cats just got lost or ran away, but I’m disturbed to learn that many people will simply abandon their cats, if they move, grow tired of them, etc. With so many wonderful organizations out there ready to help, how can this be the option they choose? I’m both sad and angry at the thought.

I text Liz later to thank her again for all the wonderful work they do, and to ask how long it will take Rex and Sketch to heal before I should expect them back in my area. Liz’s response makes me burst into tears:

“We’re happy to keep them here for adoption if you’d like. Hate to have to put them back outside.”

Wait. What?! They’re not coming back to me for a little bit longer? I just decided their fate? They don’t get to be outside anymore roaming around and basking in the sun? I don’t get to see them or feed them on my deck ever again? Oh, well, this is unexpected!

I compose myself and respond, “Oh, you do have room for them after all?”

“Well, not exactly,” she writes. “But we can always squeeze them in.”

“OK,” I respond. “As much as I’ll miss them, it’s probably for the best. Now they’ll be safe from weather, coyotes, and other threats.”

“You can come visit them anytime,” Liz writes. “They’re such great cats!”

I feel like I’ve just been smacked with a 2×4. The loss brings up old grief from when I had to euthanize my cat, Kramer. I didn’t like playing God then, and I sure don’t like it now.

So, yes, I’m on a mission — a mission to find these two babies a loving, forever home — separately or together. If you or anyone you know (in the New England area) might be interested in adding a loving, sweet companion to the family, please get in touch with me or the Merrimack River Feline Rescue Society. They’re having an adoption special right now — only $25 to adopt an adult cat (any over the age of 1). They’re losing money on this deal, but that’s how committed they are to finding homes for all of these cat.

My deal? Adopt Rex and/or Sketch, and I’ll cover the adoption fee and get you set up with litter, a litter box, and some food and toys. Need some more encouragement? See video below! And yeah, in the video I do say “tough poopies.” So what?

Please consider passing this on to anyone and everyone so these affectionate, grateful, sweet cats can find loving homes.