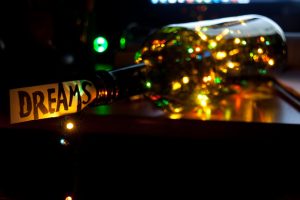 I hope you had a great holiday season and that the start of 2018 has been gentle and inspiring.

As most of you know, I am not a fan of new year resolutions. However, I do love me some intentions.

Khalid Robinson (known simply as “Khalid” in the music world) is a young singer and songwriter. When he was a junior in high school, he was watching the Grammy’s and sent out a quick tweet about how he’d love to attend the music award show someday. Three years later, he’s nominated for five awards. How is that for setting and exceeding an intention?

Setting an intention is only the beginning, though. Khalid spent those three years honing his craft, making connections, sharing his music online, and more. He didn’t send out that tweet and then sit idly by hoping it would magically happen. He made it happen.

A few years ago, after being a guest on a few Hay House radio shows, I started thinking about how fun it would be to host my own program. I merely planted a seed for myself back then because I knew that, to be a host, you needed to have a book published by Hay House.

One year later, I landed that publishing contract, and my planted seed started to take root. I worked diligently to make sure I turned in the best manuscript I could. Shortly after submitting it, I was invited to be one of the featured guests on the Hay House World Summit. My work was paying off!

Prior to the Summit, I prepared a valuable free gift for listeners of my audio lesson. I connected with my interviewer in advance to be sure what I planned to discuss would be of great interest. The result? Out of the 100 audio lessons offered, mine was the 7th most popular and the #1 most listened-through of all of them! I was ecstatic and humbled because many of the other guests in the summit had a long-standing history in the self-development world. Those roots were strong and my plant was growing!

I was then invited to co-host a short series on Hay House Radio, and naturally I accepted. I was so close to fulfilling that intention I set a couple years back!

I brainstormed how to leverage this opportunity as best I could with my business coaches. We set quarterly goals to be sure I was on track with my mission. I came up with compelling show topics, submitted whatever was requested of me in a timely manner, and prepared my content in advance to ensure great shows.

Toward the end of the series, I pitched the idea of hosting a permanent show after the short run ended, and thanks to listener feedback and the success of the shows I had co-hosted, the Hay House team said yes!

Less than two years after setting my intention, in addition to being a Hay House author, I am now a Hay House Radio show host. Pretty cool, eh?

Before you think this is some empty, braggadocious email, as with most success stories, these are merely highlights. The journey from intention to achievement is windy, steep, exciting, frustrating, challenging, and invigorating. It’s almost never linear and at times, uncomfortable. But it’s what you do in those times of struggle and setbacks that determines your success.

Here are some tips to help you stay the course when things get tough:

You hold the power in your hands, which can be both exciting and scary. Just remember, showing up fully to your life is the benchmark of courage and success. What happens outside of that is gravy.

So what action will you take today to support your intentions for the new year? Join the conversation in the comments below.

Who Are You Without All Your Stuff?
Scroll to top