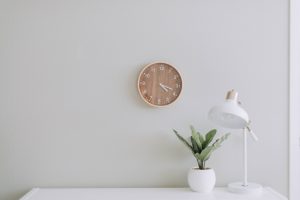 How often have you found yourself exasperated at night thinking, “There just aren’t enough hours in the day?” Though people have been convincing themselves of that forever, it’s simply not true. There are plenty of hours in the day. It’s all about how you use them.

Take a moment and imagine the life you want next week, next month, or next year. Think about your personal life, your family, your home. Consider your career, your health, your well-being. Your finances, your community, your friendships. What do you want your life to look and feel like?

Next, look at the tasks, commitments, chores, and errands that you currently spend your time on. Do they support this vision or are they working against it?

Of course, we all have some things we simply have to do, but upon closer inspection, I bet you’re putting some things in the “must” category that needn’t be there or you’re doing things out of habit and routine without pausing to evaluate its importance.

If there’s something you want to accomplish but you’re treating everything else as more interesting or pressing, then there’s a payout to you staying stuck.

Take a moment with that statement:

There’s a benefit to you being stuck, otherwise, you’d do something about it.

Procrastination is often a form of protection.

Maybe you’re intimidated by what the project entails.

Perhaps you’re frightened of what completing it could mean.

What if you go for it and it’s not all you had hoped?

What if you’re wildly successful and then people expect more from you?

Like a school kid who doesn’t study for a test, if he doesn’t do well on it, he can blame it on not being prepared. If he had studied and really applied himself and still not done well, he’d have to face the pain of perceived “failure.” Or if he studied and did extremely well, he’d likely be expected to do that again and again.

I have days where my goal is to complete certain tasks or projects, then the hours get away from me. Looking back, I scratch my head and wonder why I chose to do, say, housework instead of writing. (Since when did laundry and dishes become so enticing?)

My choice to wash dishes instead is my way of avoiding an intimidating task. However, each time I let my resistance win, I reinforce a version of a limiting belief that tells me I don’t have what it takes to get a job done. When I can take the distraction temptation as a sign to break my next step down into a smaller, more doable one, then I strengthen my resolve and my productivity muscles. And I get shit done.

So why are you not making the truly important tasks a priority?

Maybe you have a hard time saying no because you don’t want to disappoint people or you fear they won’t like you anymore.

Maybe you’re trying hard to be who you think you should be instead of who you really are.

Maybe you fear what people will say about you if you decline an invitation or choose to not volunteer.

When you fill your days with tasks that have little or nothing to do with the life you want to be living, you send contradictory messages not only to yourself but to the world in general. It takes strength and resilience to say what you mean and mean what you say, and to do what you say you’re going to do.

Take a few minutes to either review your past week or look at what you have on tap for the upcoming week and ask yourself, “Is this really the best use of my time? Do the things I’m doing support my future? Or am I operating from a limiting belief, old story, or fear? Then adjust accordingly.

To admit that your life isn’t the way you want because of your choices can be a tough pill to swallow. It can also be incredibly empowering because then you realize you are the only thing that’s standing in your way.

What To Do When the Clutter Isn’t Yours

Are You Ignoring the Signals?
Scroll to top