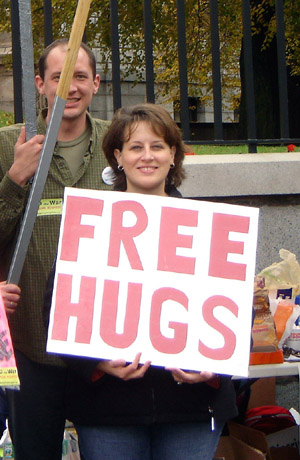 For those of you who haven’t met Juan Mann, allow me to introduce you to him. Juan is a man who was living in London when his world got turned upside down (he doesn’t specify how on his website) and he had to return to his home -– Australia. When he arrived home, he watched everyone on his flight being greeted by loved ones with open arms. He wanted someone out there to be happy to see him, to hug him. And so the Free Hugs Campaign was started. With a piece of cardboard and a black magic marker, he began asking for what he wanted. And what he found was a world full of people who needed the same -– to be seen and to be held, if only for a moment. His video went viral a few years back, but it’s definitely worth revisiting. I encourage you to read more at his site: www.freehugscampaign.org. You can see a moving video of his “experiment” below:

I just love this idea. Really, there aren’t many things that feel better than a hug – a real, strong, longer than a millisecond, hug. Naturally, I had to put this to the test. A few years back, I

decided to head to the State House here in Massachusetts on a day when people from opposite sides of a heated issue were gathering to make their positions known. It was the constitutional convention when the legislature came together to possibly vote on a ban on same-sex marriage. I wanted to go and show my support for what I believe in, but I hesitated, not wanting to be faced with what I thought would be negativity and anger – from both sides.

Perfect, I thought. Here’s a way I can participate while also diffusing the situation a bit. Off I went with my newly-created FREE HUGS sign. And hugs I got! From people on both sides of the street. Even from some legislators. Yes, some people were not interested in my invitation (grumpy state police officer!), but the smiles that came across everyone’s faces who participated, including mine, were priceless. I’ll take 100 rejections for just one acceptance and the feeling of compassion and connectedness that comes with it.

I encourage you, the next time you’re at a public event, or in your own downtown, to bring along a sign and spread some love!

Is Your Get-Up-and-Go Gone?
Scroll to top