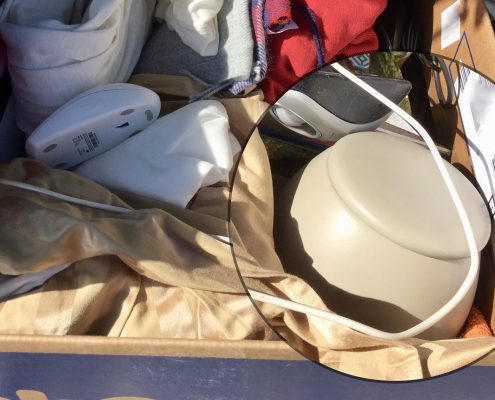 I’ve had a cotton swab container in my bathroom for years. It’s actually a sugar bowl that I bought to use as a Q-Tip holder. It’s been quite effective, what with a matching lid to keep the swabs out of sight. But it’s that lid that finally did me in.

For a while now, the clanging noise the cover makes against the bowl has been driving me bonkers. It’s super rattly and, as someone who is easily affected by energy and loud noises, it made me rattly. I finally decided it was time for it to go.

There it is in the donation box on its way to the thrift shop. —->

Some might question why I would get rid of something that still has life in it; that still functions; that isn’t broken. Isn’t that wasteful? Nope, it sure isn’t. Not when it costs me more energetically than it’s worth.

I recently spoke to a caller on my radio show, Transformational Clutter Clearing, who struggles with this exact thing — giving herself permission to let go of something she no longer loves even though it still works “well enough.”

She prides herself on living minimally, supporting the second-hand economy, and being intentional about letting things go. And while that’s admirable, it’s a slippery slope when you do it at the expense of yourself.

She talked about a window fan that was slightly broken, but still worked if positioned just right. It bothered her every time she saw it and used it, but she felt guilty replacing it since it still served its intended purpose. She didn’t want to add to the landfill just because it annoyed her.

I reminded her that one man’s trash is another man’s treasure so instead of throwing it away, she could list it on Freecycle or in a local Facebook group to see if someone wanted it to tinker with. And I encouraged her to get herself a fully functioning fan since she had the budget for it.

Because she’s worth it.

Because she deserves to have things that function properly whenever possible.

And that’s when we got to the real clutter — her belief of being undeserving and ungrateful.

As we wrapped up our call, I left her with four assignments:

I heard from her a couple weeks later that she had, in fact, replace the fan after finding a loving new home for the broken one, and she’s working on validating her new beliefs by taking more action to show herself that she is deserving and worthy.

When reconciling the dilemma of getting rid of items that still have life left in them, there are a few different “costs” to look at:

Ten years ago, I paid $8 for that sugar bowl.

Energetically, it bankrupted me. Seriously. That clanging noise threw energy out of my body every time I heard it.

The above calculation, for me, results in a definite “buh bye” to the sugar bowl. No question about it.

Even if something is in good condition and serves a purpose, but you no longer love it, consider the cost to you to keep it; how much it drains your energy; what negative connections you may have to it; or the space it’s taking up in your life that something much better could fill, whether related to that item or not.

If that isn’t enough for you to let it go, dig a bit deeper. What story are you telling yourself about why it’s not ok to get rid of it?

Peeling more layers can help uncover some things you may not have realized were there. Maybe you, like my radio caller, have an old story telling you that you have to take what you can get, or that you should be happy with what you have, or that you don’t deserve nice things.

Whatever your inner dialogue is telling you about why you should keep something you no longer love, need, or use is the real clutter.

And therein lies the gift of the item you’re struggling to let go of — it’s giving you the chance to clear some much deeper clutter — limiting beliefs that are likely holding you back in many areas of your life.

Working on clearing clutter is the best way to uncover the message in the mess as it stirs things up and puts you face-to-face with the challenge.

To make this a regular habit, try this:

Put an empty box by your front door, and every day, find something to add to it. Then, at the end of the month, send it off to the thrift store.

As you look for things to put in the box, pay attention to your thoughts, feelings, and inner chatter to hear what your resistance has to say. Jot them down in your journal and use those messages as prompts to dig deeper.

It’s this digging and excavating that will help you discover What Your Clutter Is Trying to Tell You!

I’d love to hear your thoughts on this. Talk to me in the comments below.

The World’s Largest Health and Wellness Summit Begins May 5th! And it’s...

Is This Why You Can’t Get Rid of Clutter?
Scroll to top