I bought a new car last week. (Don’t cha just love that new car smell?!). Unlike most people, I don’t mind the process of the purchase. I enjoy some healthy negotiation. In fact, last time I bought a car, the sales manager at the dealership offered me a job. For reals. I particularly like it when I’m dealing with a smart business person.

As I wrapped up the transaction on Saturday, Derek tells me he should have the car by Wednesday, but to plan on it arriving Friday at the latest to account for any unforeseen snags. 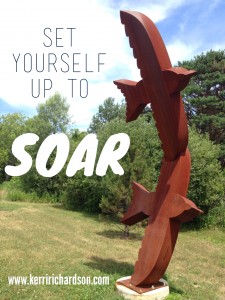 “Kerri, I have great news. I’m looking at your new car! It’s here!”

“Wow! Already? What a nice surprise!”

This is a perfect example of the tried and true business practice, and one that I’m a huge fan of: under-promising and over-delivering — a practice that too many businesses don’t use. A lot of entrepreneurs, particularly solopreneurs, tend to over-promise, thinking they need to offer the moon to land the business. Then, when they fall short, they not only piss off their new client or customer, but they also potentially damage their reputation.

Statistics show that people are more likely to share a bad experience than they are a good one. We tend to connect via commiseration instead of celebration, unfortunately. With the rampant use of social media these days, this is not a risk you want to take, so let this be just one reason you, as a business owner, make it a point to knock your customers’ socks off.

This business practice is a powerful one that you can incorporate into your general life, too. When you over-promise and under-deliver to yourself, you open the door for disappointment, frustration, failure, and aggravation, not to mention you probably validate some blocking beliefs in the process.

For example, let’s say you’ve been wanting to get back to exercising, but haven’t done any intentional activity for months. If you tell yourself that, starting Monday, you’re going to work out every day, you’re writing a big check that you probably won’t be able to cash.

Conversely, if you commit to exercise at least two days during that week, you have a better chance of over-delivering. Note the importance of the phrase, “at least”. When you include words like these in your promise (i.e. at least, or more, etc), you leave the door open for even greater success. It’s a subtle psychological technique that helps you to feel less fenced in and more open to possibilities.

Similarly, if you’re looking to improve your financial health, you might decide you’re going to stop eating out all together. Putting such stringent restrictions in place is likely to make your younger self throw a tantrum and rebel, and before you know it, you’re eating out more than you ever have! Instead, commit to cooking dinner at home at least three nights next week. This small shift in language invites your younger self to participate in your life changes.

OK, you’re up! Where in your life are you over-committing? Are you having to make excuses or apologies to yourself or others for falling short? No, you don’t suck. You just need to learn to under-promise so you can over-deliver.

I’d love to hear from you! Let’s chat in the comments below.

How Will You Spend Your 12 Weekends?

What Are You Attracting?
Scroll to top