My niece is getting married in a week. She’s the first of the grandchildren to tie the knot, and even though she’s 26 years old, it’s hard for me to not think of her as 12.

Liamarie is a special soul. She is spiritually wise beyond her years, very in touch with her feelings, needs, and fears, and willing to express them with authenticity and vulnerability.

Her maid of honor and bridesmaids have done a great job of honoring her sensitive spirit. For example, in planning her bachelorette party for this weekend, they chose activities that she enjoys, like a beach day and shopping. Even when other people might assume the party would involve a pub crawl, for example, that is not the way she’s interested in celebrating this occasion. So her girls have very intentionally catered the plans as such, and as a result, Liamarie will most likely feel seen, heard, understood, and loved for who she is, which is the best gift anyone can receive. 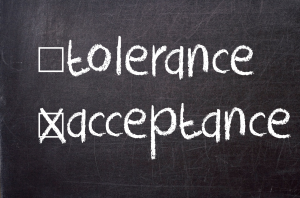 Although the opposite may seem true, it’s energetically easier to accept and love people for who they are instead of wishing they would behave in a different way. Instead of worrying so much about what others are or aren’t doing, better to spend more time on where you’re tripping yourself up. By focusing on your happiness, your fulfillment will bubble over, and those in your life will benefit as a result.

I wholeheartedly believe that everyone is always doing the best they can for where they are on this spiritual and emotional journey called life. If where they’re at isn’t a fit for you in your life, then move on, set a boundary, or have an honest conversation rather than trying to morph them into who you want them to be.

So when you have a hard time seeing the perspective of someone in your life, whether it’s a spouse, business partner, employee, or sibling, consider how you might understand and respect their position or stance instead of fighting against it. Coming at it from this angle makes for a quicker and more peaceful resolution, and shores up some cracks in the foundation of the relationship, helping you to not have to bump up against this same obstacle in the future.

OK, you’re up! Have you experienced a sense of peace by accepting someone for who he or she is? Is there a situation or a person you’re struggling with because you can’t understand why they are the way they are? Have you been the target of someone who’s pushing you to change or be someone else? I’d love it if you’d join the conversation in the comments below!

Can You Go with the Flow?

What’s In Your Emotional Wardrobe?
Scroll to top