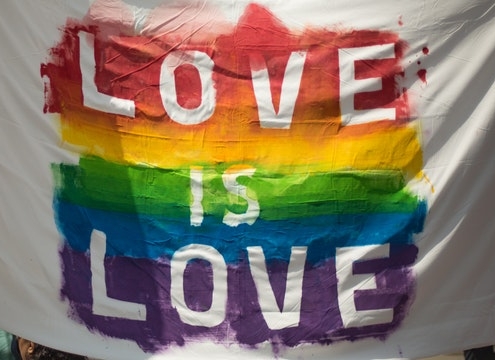 Although I finished watching the TV series, Schitt’s Creek, months ago, I’m still obsessed with it. The writing is so clever, the actors are comedic geniuses who can also tug at your heart strings, and the chemistry among the cast is palpable.

I also love that the relationship between David and Patrick is woven into the story as naturally as any other. There is no big “coming out” episode or a need to explain or justify their love. Instead, it’s just who they are. While their beautiful relationship is a central theme in the series, their sexuality isn’t.

The first person I came out to was my sister, Cheryl. She and I were away at a weekend retreat, and knowing it was going to be just the two of us, I promised myself I would share this part of my life with her. I also knew she was a safe person to start with as she never spoke insultingly about any minority group and she had friends who were part of the LGBTQ community.

When taking a courageous step, it’s always good to have a team of support lined up. Although some of my friends knew I was in a relationship with Melissa, Cheryl was the first support team member from my family.

I can picture the moment. We were in our room sitting on our respective beds just before going to sleep. We were chatting about nothing significant. Or maybe we were. To be honest, I was half-listening knowing what I was about to do.

“So I want to share something with you,” I said.

She locked eyes and leaned in, giving me the go ahead.

“Melissa is not just a friend of mine. We’re, um, together.”

“OK, our family is already pretty cool,” she said. “Now it just got a whole lot cooler!”

Her comment totally lightened the energy and we both started laughing.

Her question kind of stopped me in my tracks because I hadn’t ever used the word “gay” to describe myself. Except when Melissa kissed me in college and I thought to myself, “What is she doing? I’m not gay.”

“Well, I fell in love with someone and she happens to be a woman,” I replied. “That’s probably the best way I can answer your question.”

Cheryl nodded her head in understanding. “I get it,” she said.

I share this story for a few important reasons:

In a recent survey, it was found that “42% of LGBTQ youth seriously considered attempting suicide in the last year, including more than half of transgender and nonbinary youth,” and “LGBTQ youth who had access to spaces that affirmed their sexual orientation and gender identity reported lower rates of attempting suicide.”

In a time when hate seems much louder than love, let’s do our part to reverse that.

Love people for who they are. If you struggle to do that, the work that’s needed is yours, not theirs.

If you feel threatened by someone different than you, take the time to get to know them. As Brené Brown said, “People are hard to hate close up. Move in.”

We can use all the allies we can get.

Oh, and in case you didn’t know PRIDE is an acronym that stands for Promote Respect, Inclusion, and Dignity for Everyone.

Don’t Be Surprised When Your Opinion Changes

How to Be Present and Purposeful
Scroll to top